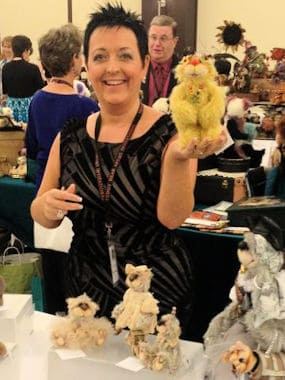 Katherine Hallam was a bear collector at first.  When she discovered miniature bears in the late 80’s she decided to trying making them herself.  She bought a kit but that did not inspire her so I threw away the pattern and started designing her own bears.

She has done arts and crafts, but making bears gave her a special “fuzzy” feeling . The creative process is the most important thing!  She is self taught and a lot of her bear making skills have been learned through trial and error.   Always looking for new ideas and techniques, she has transformed her bears, always looking forfew ideas and techniques.  Katherine’s bears are made using traditional bear making techniques along with new ideas including needle felting, needle/scissor sculpting, Fimo sculpting and hand painting, so no two are ever the same. The faces don’t come from a patterns they are born in her hands. She knows when its time to stop when the face talks to her!  All of her bears noses are hand made by Katherine and all have her signature diamante stone.

Katherine’s bears are collected all over the world and she has won many awards for her bears, including the highly coveted TOBY awards.  In 2014 she won A People’s Choice award and was also voted Teddy Bear Artist of the year.  ideas to inspire me. 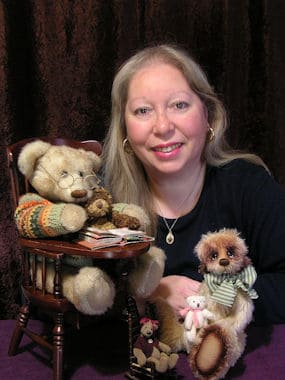 Monica Spicer was born in Argentina but has spent most of her life in Australia. She started making bears in 1992, almost by accident. After almost completing and furnishing a doll’s house, she thought of making a tiny teddy bear for the nursery room… and that’s how it all started. Her style has change quite a lot from one year to the next, and she is so glad she still have plenty of ideas in her head which will keep her going for years to come. She sometimes surprise herself as she sees yet another little bear being born in her hands.

Monica has been blessed with  a wonderful gift, and she is so glad she can touch the hearts and souls of so many collector’s of these beautiful treasures she creates. Monica’s bears have been offered from Arts&Souls since 2001 and we are still delighted with her designs as they have changed a bit over the years.  For a number of years she created gorgeous “Elegant Lady Bears” with long flowing gowns, big hats with flower and ribbons, parasols and even beautiful shoes. We look forward to carrying more of her “cheeky” bears, as she calls them.  They all seem to have a bit of an attitude.