Lundberg Studios is a premier art glass manufacturing company.  For over 44 years, they have produced some of the finest art glass of our times. Lundberg Studios is located in the small coastal town of Davenport, California.   Lunberg Studios began in the backyard hot shop of our late founder, James Lundberg, in 1970.  Master craftsman individually create an exquisite array of vases, scent bottles, paperweights, lighting and custom commissions.  Exclusive to Lundberg Studios, design styles range from antique to contemporary, from Tiffany to Art Deco.  Lundberg Art Glass is made entirely at the studios in Davenport on a limited production basis.  Melting all its own exotic colors, Lundberg Studios has refined the art of making quality glass by using a blend of techniques both traditional and innovative.  To own a piece of Lundberg Art Glass is to own an heirloom of tomorrow.

In 1974, Daniel Salazar was hired as a glass grinder by Lundberg Studios. By 1975, he was working with hot glass as a helper or pontilman there. It soon became evident that Danny had a unique flair for design. By 1978, he had begun producing and designing his own paperweights. He was also influential in developing certain techniques in the California Style Crystal Encasement lamp-working process.  Today, Danny has earned a favorable reputation for his skill in producing images in glass that are intricate, yet delicate and natural. Florals, birds, underwater scenes and abstracts are key designs used to create paperweights, perfume bottles, vases and jewelry jars of incomparable beauty. Much of the inspiration for his work stems from an interest in botany and the collecting of Asian art and antiques. Since childhood, a passion for sketching and watercolor has been the source for his unique artistic development. He has attended Cabrillo College, taking classes in color and design, and life drawing.

With all certaintly, the works of Daniel Salizar will be among the heirlooms of tomorrow.  His superior glass creations have been exhibited at prominent Art Museums throughout the world, and are included by many in their permanent collections. Each piece is signed and numbered by the artist. Since 2003 Arts & Souls has proudly presented the magnificent work of Daniel Salar in our world class collection of beautiful art glass. 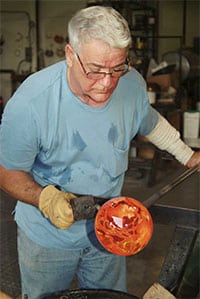 Their business began in 1970 with prayers and dreams when Charles began teaching himself the art of glassblowing in his backyard.  The chemistry of Charles’ glass is unique to Lotton Glass.  Lotton Art Glass is one of the very few studios in the world to start with elements of the earth like sand, soda ash, lime, borax, zinc and metals resulting in some of the most breathtaking colors that you will ever see.

Each artist has found his own style, or niche you might say, that produces some of the finest glass made in the world today.  Charles’, David’s and Daniel’s creations now permanently grace hundreds of museum as well as private collections.  Daniel’s nephew Jerry Herr also produced beautiful perfume bottles and paperweights before he was forced to retire with a bad back. Lotton Art Glass collectors have followed them through over 45 years of glassmaking, watching the incredible progression of design in their work. 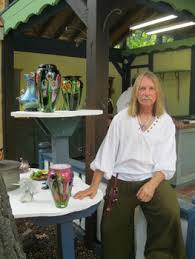 Stuart Abelman’s artistic ability was recognized at an early age, giving him the opportunity to study sculpture and painting as a young man. By seventeen he had quite an impressive portfolio. He was accepted to Carnegie Mellon University in Pennsylvania where he studied fine art for four years and there received his Bachelor of Fine Arts degree.

It was in his senior year at Carnegie Mellon University that he first saw the brand new glass department. It was love at first sight. He devoted his entire senior year to glassblowing. Stuart then entered the graduate four-year Master of Fine Arts program at U.C.L.A. in California and proceeded to study and blow glass for four more intensive years. He received his Master of Fine Arts from U.C.L.A. in 1976. By 1976 he had already created a body of work which was finding its way into art shows and galleries.  In Stuart’s last year at U.C.L.A., El Camino College in California called to ask if he would run their glassblowing department. He did this as well as developing a flat glass program for them.

After several years as a college instructor, Stuart realized that although he loved teaching, he did not have the time to create in glass all of the ideas he found himself sketching constantly he found himself drawing ideas for glass on paper napkins in restaurants and on airplane flights. It was time to start his own studio, so in 1977 Stuart left teaching and started Abelman Art Glass.

Stuart spent much of this year building his studio: Furnaces, pot furnaces, glory holes, annealing ovens, glassblower benches, etc… and in 1977 the first furnace was lit at the Abelman Art Glass studio in Southern California.  Although glassblowing was one of Colonial America’s first industries, and it enjoyed great popularity during the Art Nouveau period in the late 1800’s, hand blown art glass had all but disappeared from the American art scene until the 1970’s. Stuart Abelman was one of a select group of pioneering studio glass artists who saw the magic and challenge in glass and set about taking the medium further than ever before.

Stuart uses his own formulas and the finest silica sand to ensure the purest quality glass possible. Each piece is made entirely of hot molten glass and is worked and completed at the furnace. All the colors and design patterns are formed from the hot glass. No paint is used. Many of the beautiful colors are made with gold, silver and other precious metals.

Stuart’s glass pieces are shown in galleries and museums around the world and have become permanent additions to museum, private and celebrity collections here and overseas. His piece in the permanent collection of the Corning Museum is particularly notable for its infusion of life into a figurative sculpture in glass. Stuart Abelman was first to bring figurative sculpture to hand blown glass in the new art glass studio movement in the United States in the late 1960’s and early 1970’s. It was a hard sell back then but has become an established form of expression in the current art glass arena. Many glass artists now express themselves through figurative sculpture.

Abelman’s early work in figurative sculpture led to his studio production of the unicorn which was chosen for the American Express Catalog in the 1980’s. Its success allowed him to expand his artistic endeavors in this area and led to his reptile and amphibian work. During these same years Stuart wanted to find another way to breathe life into glass in a way that would touch everyone, glass collector or not. The result of this desire was the series of Limited Edition Clowns which are much sought after. Nancy Bingham, an American authority on Murano clowns put Stuart Abelman’s clowns into her second book for private Murano clown collectors because of their uniqueness, level of difficulty and artistic expression. Stuart is currently designing the fortieth limited edition clown.

Stuart also produces a series of exquisite Christmas ornaments that have graced the cover of Sunset Magazine as well as the White House tree. Stuart has journeyed through so many new frontiers in the American hand blown art glass studio movement including extensive commission work for the movie and entertainment industry and was once heard to say, “I have been working with hot glass for over thirty-five years and I am certain it runs through my veins.”